Mark Twain Day By Day was originally a print reference, meticulously created by David Fears, who has generously made this work available, via the Center for Mark Twain Studies, as a digital edition. Please recognize that this is a preliminary, BETA version of a resource which we will continue to develop in the coming years. While we are excited about the functionality it currently offers - for instance, the searchbar in the upper left-hand corner - we also recognize that there are numerous errors (to formatting, spacing, punctuation, etc.) which were not part of the print edition. Moreover, the formatting may change based upon which browser you use to access the site. Rest assured, we are continuing to work to correct these problems and increase functionality so as the maximize the accuracy, accessibility, and user-friendliness of the resource. If you encounter major technical difficulties or find entries that have been made particularly messy or indecipherable during the digitization process, please let us know via [email protected]

“Mrs. Clemens urged that you & Bliss were right. She said—but that ain’t any matter. The only thing is, that I have started in on South Africa, & have done two chapters on it & am moving along” [MTHHR 275-6]. Note: See May 3 to Frank Bliss.

May – Harper’s Monthly May issue included a review of TSA and TS,D and Other Stories in the Uniform Edition of Mark Twain’s works by Laurence Hutton. Tenney: “A rather general, brief discussion, noting that the various stories in these two books all show ‘that wonderful versatility and absolute genius of their author which is so far above the range of mere humor, as humor, that the world is beginning, by degrees, to realize that Mark Twain is a great deal more than a humorist, though to be a humorist is a great deal” [Tenney: “A Reference Guide Seventh Annual Supplement,” American Literary Realism, Autumn 1983 p. 168].

May 1 Saturday – At 23 Tedworth Square in London, Sam wrote to Frank Fuller (likely still in N.Y.C.):

I was very glad to get your letter [not extant], & hear your cheery voice again; but I’m going to wait a while before I wrote you, because there’s fully 2 weeks’ writing to do on this book yet, possibly 3—& I am rushing.

But when I get the decks cleared, then I’ll write you a letter which I’ve had in my mind a year & more.

Sam felt that between the two of them they could “hatch some fun” with the idea (of an expensive grand lecture), but asked Fuller not to mention it to anyone; even Livy “mustn’t suspect” until the time was right [MTP]. Note: Sam was rushed after a couple of times proclaiming the new book was “finished” due to his being convinced by H.H. Rogers, Frank Bliss, but mostly Livy, that the South African campaign should be added.

May 1 ca. to July 31– In an unknown place Sam wrote one sentence to Frank Bliss asking him to make a facsimile of “the above two lines” instead of setting them in type [MTP]. Note: likely in connection with FE. 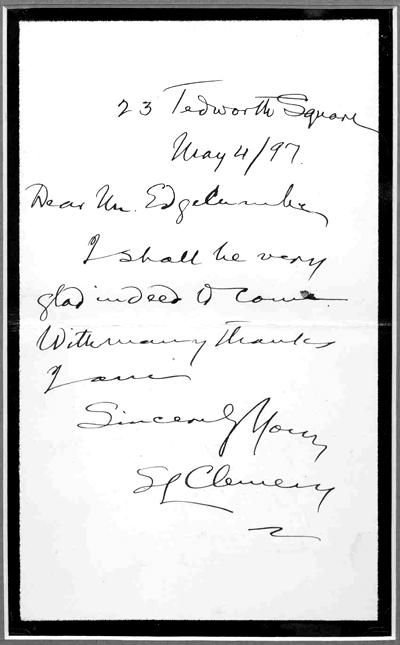 Now you’re speaking up! Your letter had a virile ring to it. I had concluded weeks ago that your interest in the book was a little pale.

Yes, come over here. I have thought of it fifty times.

The rest of his letter has to do with Bliss talking Chatto into letting him have the Australasia territory through a “house in Sydney” who wanted it, and details of the book and publishing. Sam provided his address but cautioned not to put it on a letter or tell anyone; he gave his cable address

May 4 Tuesday – At 23 Tedworth Square in London, Sam wrote to

SLC used mourning border for most letters from Susy’s death on, then from Livy’s death on.