Mark Twain Day By Day was originally a print reference, meticulously created by David Fears, who has generously made this work available, via the Center for Mark Twain Studies, as a digital edition. Please recognize that this is a preliminary, BETA version of a resource which we will continue to develop in the coming years. While we are excited about the functionality it currently offers - for instance, the searchbar in the upper left-hand corner - we also recognize that there are numerous errors (to formatting, spacing, punctuation, etc.) which were not part of the print edition. Moreover, the formatting may change based upon which browser you use to access the site. Rest assured, we are continuing to work to correct these problems and increase functionality so as the maximize the accuracy, accessibility, and user-friendliness of the resource. If you encounter major technical difficulties or find entries that have been made particularly messy or indecipherable during the digitization process, please let us know via [email protected]

Sam had four different schoolteachers in Hannibal: Mrs. Horr, Miss Newcomb, J.D. Dawson, and William O. Cross [Wecter 211]. Wecter concludes that the chance find of a page about Joan of Arc seemed to stimulate Sam to learn more than all these teachers put together [211]. Paine says that Sam learned a little German by ear from the village shoemaker, briefly tackled Latin, and about five years later was teaching himself French. Paine also writes that Sam claimed to have read the Bible through “before I was 15 years old” [MTB 1281].

Music, often in church, was part of Sam’s early years. Here are two inserts of an 1869 Song Book, annotated some 20 years later, by Clemens. Many of these he heard in 1850. Designated as 1850 are A Life on the Ocean Wave, A Wet Sheet and a Flowing Sea, Bell Brandon, By the Blue Alsatian Mountains, and Larboard Watch: 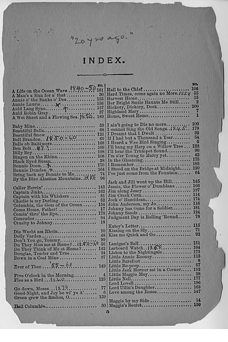 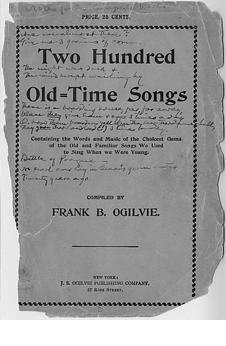 January 11 Friday – Glasscock’s Ben Negro was hanged before a huge crowd—the first legal execution in the history of Marion County. In Villagers of 1840-3 Sam wrote in 1897:

“The Hanged Nigger. He raped and murdered a girl of 13 in the woods. He confessed to forcing three young women in Virginia, and was brought away in a feather bed to save his life—which was a valuable property” [Wecter 215].

Note: Dempsey writes, “there is no evidence in the court records or newspaper accounts that Ben killed anyone in Virginia or that he was too valuable to be hanged there…This story seems to be an invention of Clemens’s, which, like other of his inventions, occasionally shows up in history books” [131].

“I suppose you have not been attacked with the yellow fever, that by the way is raging so her that it is feared it will carry off nearly half the inhabitants, if it does [not] indeed depopulate the town. In consequence of it many of our best citizens intend starting for California so soon as they can make preparations” [Wecter 214].

January 30 Wednesday – Jane Clemens wrote Orion about the availability of the Hannibal Journal, a paper her late husband had always wanted to buy [Wecter 224].

April – Sam joined the “Cadets of Temperance” in order to wear the regalia and march in parades. The organization began about May 1847, with a cadet branch opening three years after. During the late 1840s, temperance crusades were common in the country. A requirement of cadets was to abstain from drinking, swearing, and smoking. Sam joined to wear the uniforms and march in the May Day and Fourth of July parades. Then he quit, counting it too high a price to pay. Sam would try several times in his life to quit smoking, but was always unsuccessful. He later professed that the only sensible rule of abstinence was never to smoke more than one cigar at a time. The roster of Cadets included Henry Clemens, Tom Nash (b.1835?), Jimmy McDaniel, John D. Meredith (1837-1870), and others. Sam’s name on the roster was marked “withd” meaning “withdrew” [Wecter 153-4]. Note: Dr. Meredith had two sons, John D. (above) and Charles (b.1833?) [MTP].

April 6 Saturday – Arnold Buffum wrote Pamela Clemens that the price of the Tennessee Land had gone down to ten cents per acre. Pamela forwarded the letter to Orion in St. Louis, saying “Ma thinks you had better accept Buffum’s proposal and let him sell a portion of the land in that way, say half or more, limiting him to the quantity.” Pamela was suspicious that Buffum simply wanted the land for himself [MTBus 17]. John Marshall Clemens had placed great hope for the family’s future in the land he paid four or five hundred for in the 1830s, and even cautioned them to hang on to it on his deathbed. Orion may have simply been inept, or failed to sell the land out of respect to his dead father.

April 11 Thursday – Sam witnessed a killing on this date.

“…the young California emigrant who was stabbed with a bowie knife by a drunken comrade; I saw the red life gush from his breast” [Wecter 219].

May – A traveling mesmerizer (hypnotist) stopped in Hannibal for a two-week show. Sam volunteered to be a subject, but unlike another boy, failed to go under. When Sam saw all the attention that others got when hypnotized he volunteered again and went along with a ruse that fooled everyone. He even allowed himself to be stuck with needles without flinching, convincing even his mother [Neider 50-58]. Well, Sam could easily fool his mother about many things (or thought he could).

May 1 Wednesday – Sam marched in the May Day parade with the Cadets of Temperance [Wecter 153].

May 3 Friday – A fragment of the Tennessee Land was sold for $50. Orion may have used this money and savings to start a new paper in Hannibal in September [Wecter 225].

July 4 Thursday – Sam marched in the parade with the Cadets of Temperance, and later recollected that he picked up a cigar butt from the street, smoked it, and quit the group [Wecter 153].

November 29 Friday – Sam had his picture taken holding the typestick containing “SAM” on the eve of his fifteenth birthday [MTP].